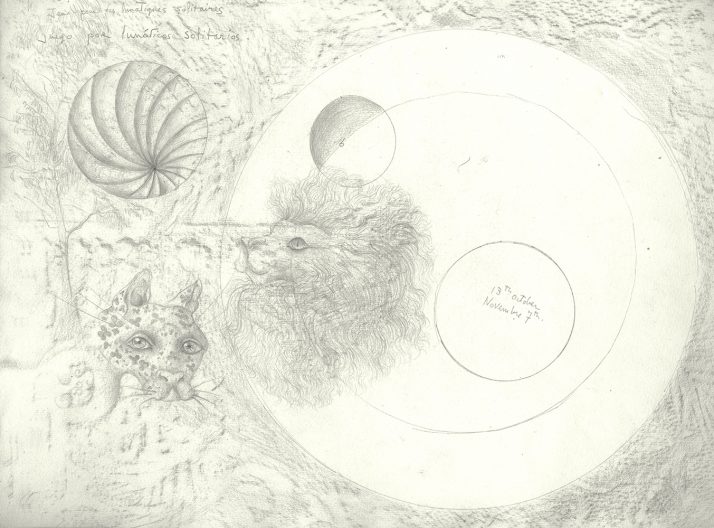 Mary-Anne Martin|Fine Art is pleased to announce the presentation of a rare original sketchbook by Leonora Carrington, drawn in October 1940 while the 23 year old artist was involuntarily committed to the Sanatario Morales, a psychiatric institution in Santander, Spain. Following the forced separation from her lover Max Ernst and the onset of World War II, Carrington suffered a nervous breakdown and was institutionalized by her British parents. While she was suffering through drug-induced seizures, the chemical equivalent of shock therapy, she was also provided with art materials by her doctor, Luis Morales, and encouraged to draw as part of the healing process.

Informally titled “Sketches from Down Below,” this is one of only two known sketchbooks from this period. One that is dated September, 1940 was broken up many years ago and the pages are dispersed throughout various collections. The one we are exhibiting is still intact after 78 years and consists of original front and back covers and 30 graphite drawings.

The sketches bear witness to Carrington’s exquisite draftsmanship, imagination and creativity. Several of them relate directly to paintings she completed in 1941- 42 following her release from the hospital, her journey to New York and reconnection with expatriate surrealist friends, including André and Jacqueline Breton, Stella Snead, Luis Buñuel, Amédée Ozenfant, Max Ernst and Peggy Guggenheim. The notebook was acquired by a private collector from the Surrealist dealer Julien Levy (1906-1981), who obtained it directly from the artist.