For Master Drawings New York 2020, Mary-Anne Martin | Fine Art is exhibiting watercolors, drawings, and prints by Francisco Toledo (1940-2019). Featured in this memorial show is a never-before-exhibited sketchbook from 1982 consisting of more than fifty drawings in pen and ink, representing Toledo’s version of the Mayan codex, Popol Vuh. The exhibit will remain on view at the gallery through February 29, 2020.

View installation shots of the show

The following is a selection of works included in the exhibition:

We invite you to visit us in booth D3 at Art Basel Miami Beach, December 4 – 8. For more information please contact Mary-Anne Martin or Emmaline Deihl.

The following is a selection of works that will be exhibited.

Featuring paintings and works on paper dating from Rivera’s studies in Paris and extensive travels through Italy before returning to Mexico to lead the Mexican Mural Renaissance. Included in this exhibition is a drawing of a surgical operation that Rivera witnessed in Paris in the clinic of Dr. Jean Louis Faure, selections from his 1920-21 Italian sketchbook, and lively market scenes and studies of children and indigenous “tipos mexicanos.” A highlight is the tender 1935 portrait of Delfina and her son Dimas; Delfina modeled for the artist and became part of his household in the 30’s when he was married to Frida Kahlo. Supplementary material includes “Vigil” an important, rarely seen 1929 painting by José Clemente Orozco, which was included in his first show in New York at Alma Reed’s Delphic Studios. This work was cited in “The Art News” as one of the best paintings in the show.

The following is a selection of works from the exhibition.

In our adjunct gallery (“The Back Room”), is an installation of paintings, drawings, and sculpture by women surrealists working in Latin America. Included are works by Leonora Carrington, María Izquierdo, Frida Kahlo, Alice Rahon, Bridget Bate Tichenor, and Remedios Varo. Also included are works by contemporary artists including Isabel De Obaldía from Panama and Elena Climent from Mexico.

The following is a selection of works from the exhibition.

For the 2019 edition of The Art Show, Mary-Anne Martin Fine Art presented paintings, drawings, photographs and sculptures portraying two constant companions of artists throughout history: cats and dogs. Our booth encompassed a variety of artistic styles and movements, from Pre-Columbian to contemporary art from Mexico and Latin America. Cats and dogs are often used as symbolic motifs derived from their importance in ancient cultures, or sometimes depicted as a playful element. Artists included Leonora Carrington, Alice Rahon, Remedios Varo, Francisco Toledo, Graciela Iturbide, and Nahum B. Zenil, in addition to sculptures and paintings by contemporary artist Isabel De Obaldía, whose work incorporates Pre-Columbian themes and canine and feline forms native to her home in Panama.

We invite you to visit the gallery for our spring/summer exhibition Artists by Artists: Portraits and Self-Portraits, on view through June 28.

The following is a slideshow of installation photos. Click the accompanying links for more information on the works shown. 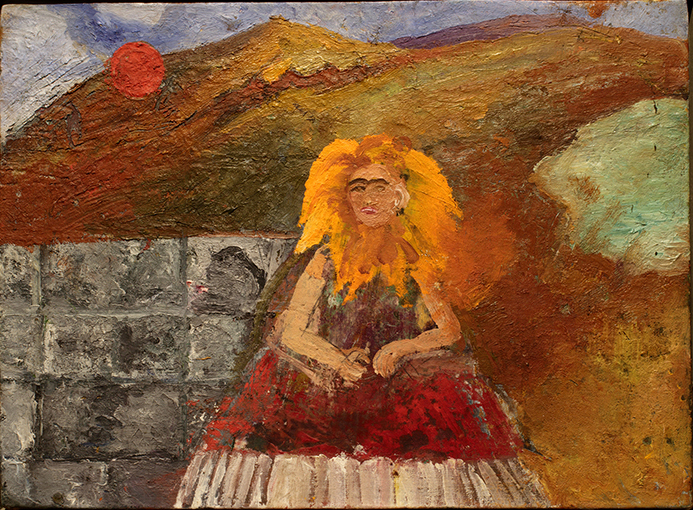 Mary-Anne Martin|Fine Art is pleased to announce our spring/summer exhibition “Artists by Artists,” featuring self-portraits, commissioned portraits, and portraits of artists by their contemporaries. Included are paintings, works on paper, and photographs from the gallery’s inventory, augmented by gracious loans from private collectors. On view are works by Lam, Kahlo, Carrington, Gerzso, Covarrubias, Rivera, Siqueiros, Orozco, Tamayo, Toledo, and Zenil, among others, and photographs by Nickolas Muray, Graciela Iturbide, and Dora Maar.

Leonora Carrington, Sketches from Down Below, October 1940

Mary-Anne Martin|Fine Art will exhibit three original artist’s sketchbooks. Please visit us in booth A4 at the Park Avenue Armory, February 28 – March 4. The following sketchbooks will be on view. 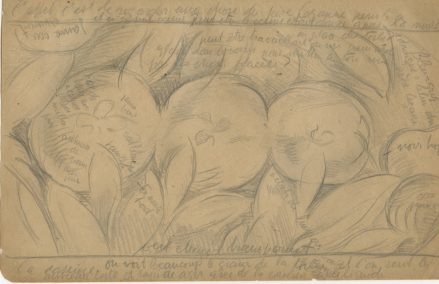 At the conclusion of the Mexican Revolution in 1920, José Vasconcelos, the new Secretary of Public Education, devised a plan to promote the ideals of the revolutionary government through an ambitious program of mural painting.  Diego Rivera was asked to head the movement, and accepted on the condition that that he could first tour Italy in order to study first hand the fresco paintings of the Renaissance. Traveling in Italy, Rivera sketched as he viewed the frescoes and paintings of artists such as Giotto, Uccello, Mantegna, and Tintoretto, making handwritten notes in several languages directly on his drawings.  He was keenly interested in the relationship between painting and architecture, later putting his observations to brilliant use in the murals that he painted.  In translating the formal ideas and techniques of the Renaissance painters to his mural projects in Mexico and the United States, Rivera provided the historical link between the Italian Renaissance and Twentieth Century Muralism in the Americas. 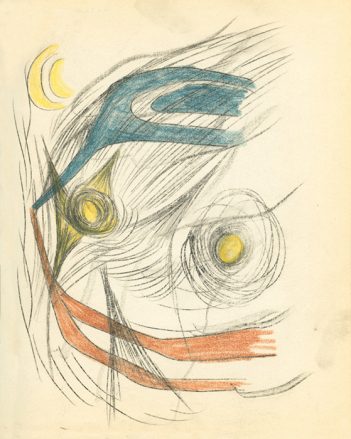 This sketchbook was created in 1943-46 when the young artist was strongly influenced by the circle of Benjamin Péret, a small group of European artists exiled in Mexico during the 1940s. The book presents a striking record of Gerzso’s close ties to Leonora Carrington, Wolfgang Paalen, André Breton, Remedios Varo, César Moro and Alice Rahon. Many of the drawings in the sketchbook were made through the carbon paper transfer method, which the Surrealists used to stimulate automatic drawing and “subconscious” creativity. Another group of drawings was inspired by the discovery of the Pre-Columbian village of Tlatilco. Pre-Columbian art and archeological sites had a profound impact on Gerzso’s own artistic output, as it helped him move away from European ideals to create his own artistic style deeply rooted in the landscape, culture, and history of Mexico.

Leonora Carrington, Sketches from “Down Below,” October 1940 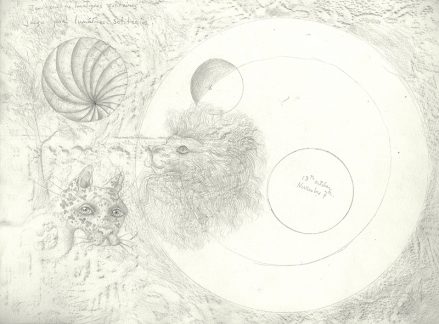 This rare original sketchbook was drawn in October 1940 while the 23 year old artist was involuntarily committed to the Sanatario Morales, a psychiatric institution in Santander, Spain. Following the forced separation from her lover Max Ernst and the onset of World War II, Carrington suffered a nervous breakdown and was institutionalized by her British parents. While she was suffering through drug-induced seizures, the chemical equivalent of shock therapy, she was also provided with art materials by her doctor, Luis Morales, and encouraged to draw as part of the healing process. The sketches bear witness to Carrington’s exquisite draftsmanship, imagination and creativity. Several of them relate directly to paintings she completed in 1941- 42 following her release from the hospital, her journey to New York and reconnection with expatriate surrealist friends, including André and Jacqueline Breton, Stella Snead, Luis Buñuel, Amédée Ozenfant, Max Ernst and Peggy Guggenheim. It is being exhibited to the public for the first time.

Mary-Anne Martin Fine Art is pleased to announce the “discovery” of an important painting by the Mexican Muralist, David Alfaro Siqueiros, the 1937 Self-Portrait with Mirror. Known only from a black and white photograph, this extraordinary painting, purchased from the artist by the American composer George Gershwin (1898-1937), has been referred to as “lost” for about 80 years. Gershwin died of a brain tumor at the age of 38 and so the history of the painting marks the end of a dramatic and tragic story. Gershwin’s estate was inherited by his mother and the painting hung for most of its existence on Central Park West in New York City.

Not seen in public since early 1937, the work will be shown this summer in a mini exhibition at Mary-Anne Martin Fine Art, surrounded by other key works by Siqueiros, including: Landscape (Taxco), c. 1931, La Patrona, 1939, Portrait of Señorita Martita Orrego Matte, 1942, and The Good Neighbor Policy, 1951

Known for his active participation in Left Wing politics – he was a Communist and also fought on the side of the Republicans in the Spanish Civil War – Siqueiros figured prominently in the history of avant-garde art. In 1936 he founded his “Experimental Workshop” at 5 West Fourteenth Street in New York City. The mission of the Workshop was to explore the use of modern industrial materials such as Duco (pyroxylin) and other synthetics, using tools like spray guns, palette knives and a technique he called “controlled accidents.” His most promising student was the 24 year old Jackson Pollock, whose later “drip paintings” changed the history of post-war American art.

Self-Portrait with Mirror, which has survived in near-perfect condition, is airbrushed with pyroxylin on a sheet of Bakelite, a highly unusual combination. Although the painting has been written about extensively, and even appears on the cover of a book, no art historian had seen it in color or examined it in person until two weeks ago, when, at our invitation, esteemed Siqueiros expert, Dr. Irene Herner Reiss traveled from Mexico to study the painting and was thrilled to see this famous work at last.

While they had met earlier, the friendship between George Gershwin and Siqueiros developed on a trip that Gershwin made to Mexico in 1935, led by the psychoanalyst Dr. Gregory Zilboorg. Gershwin, an amateur painter, hit it off with Siqueiros right away and invited him to paint his portrait, which after many changes and amplifications resulted in the large and elaborate canvas, George Gershwin in a Concert Hall, 1936. Gershwin, a serious collector of Modern art, was a great admirer of Siqueiros’s work and owned five of his paintings. He contributed generously to the funding of The Experimental Workshop, and one of the works he owned, Proletarian Victim, 1933 was donated to the MoMA, New York by the Estate of George Gershwin.

Mary-Anne Martin Fine Art is excited to present Self-Portrait with Mirror to the public for the first time, in glowing color.

Mary-Anne Martin|Fine Art presents a mini exhibition of seminal works by David Alfaro Siqueiros, spanning twenty years of his career. Self-Portrait with Mirror (1937) is being exhibited to the public for the first time since 1937.